After considerable pushback from the Plugin Review team, WordPress.org has removed a plugin called Zamir, which was created by a Russian developer to display the Z symbol in support of Russia’s 2022 invasion of Ukraine.

The plugin gained attention after Gravity Forms founder and CEO Carl Hancock noticed that it was listed under the “New” list of plugins for WordPress.com customers. 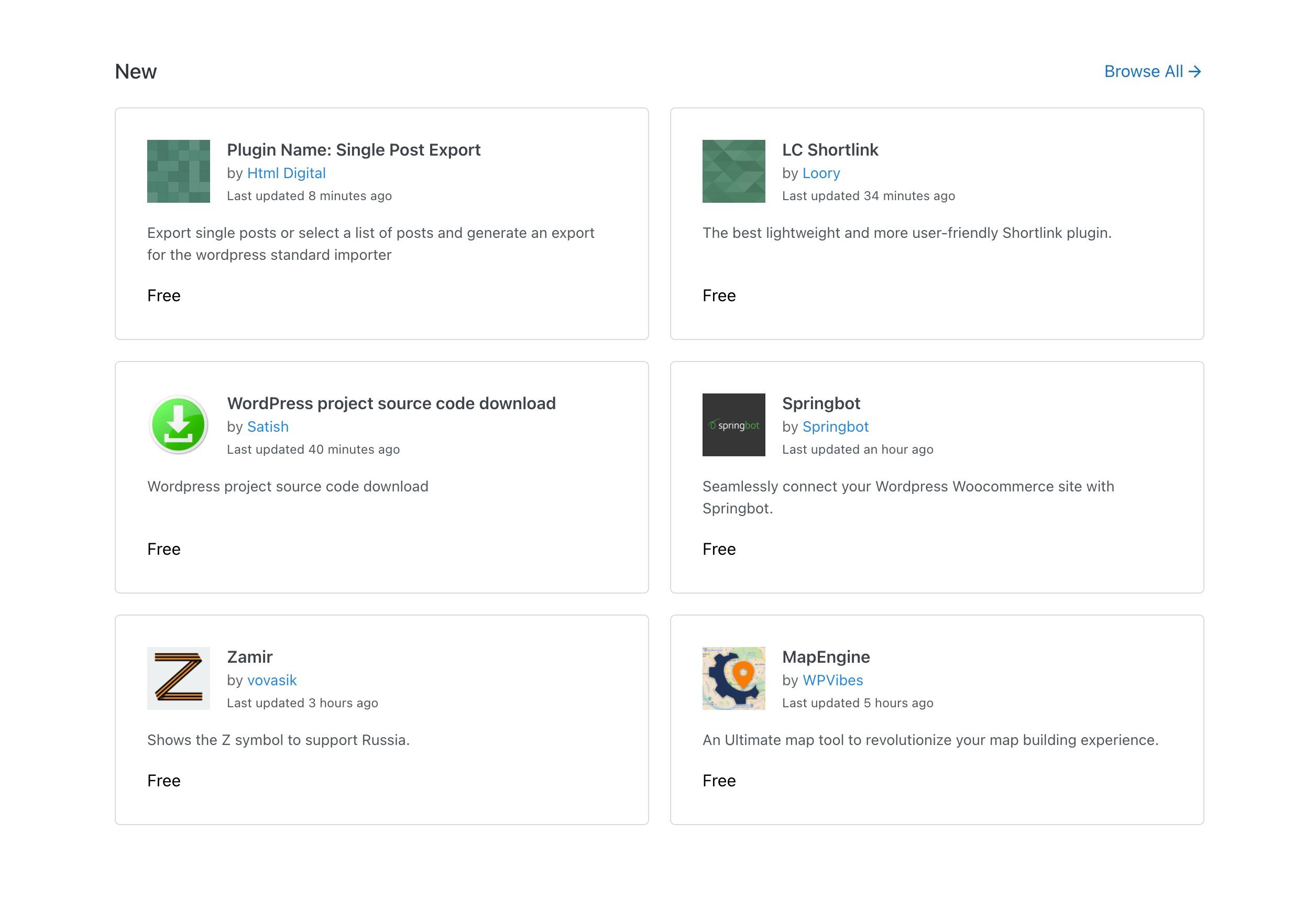 Hancock contacted WordPress’ plugin team to request its removal but was met with a defense for its inclusion based on what the representative deemed to be a lack of violation of the guidelines. The representative told Hancock via email that “it is permitted as long as it does not devolve into hate speech or encouraging violence.”

Outrage over the plugin being hosted on WordPress.org sparked heated conversations on Twitter, Post Status Slack, and in WordPress’ #pluginreview Slack channel where project contributors work in the open.

Mika Epstein responded to discussion in the #pluginreview channel to confirm that the plugin was allowed to be in the directory:

This is an annoying, but allowable, thing at this time. We have no restrictions about plugins that are for ‘support’, as long as they avoid hate speech, encouraging violence, and raising money for military orgs (regardless of which side).We have a number of plugins that people find personally objectionable. Someone might hate a ‘show support for LGBTQ’ plugin after all. In this case, the plugin is a ‘show support for Russia’ and has no violation to the guidelines. Much like the porn-embed plugin that a number of people hate, you don’t have to use it. Hosting plugins here does not now, nor has it ever that I’m aware of, conferred any sort of approve besides it being secure and not violating guidelines at the time of submission.

Meanwhile, the plugin had begun racking up negative reviews and Hancock had managed to get WordPress’ project leadership to take a second look. The plugin was temporarily suspended while leadership considered the matter. 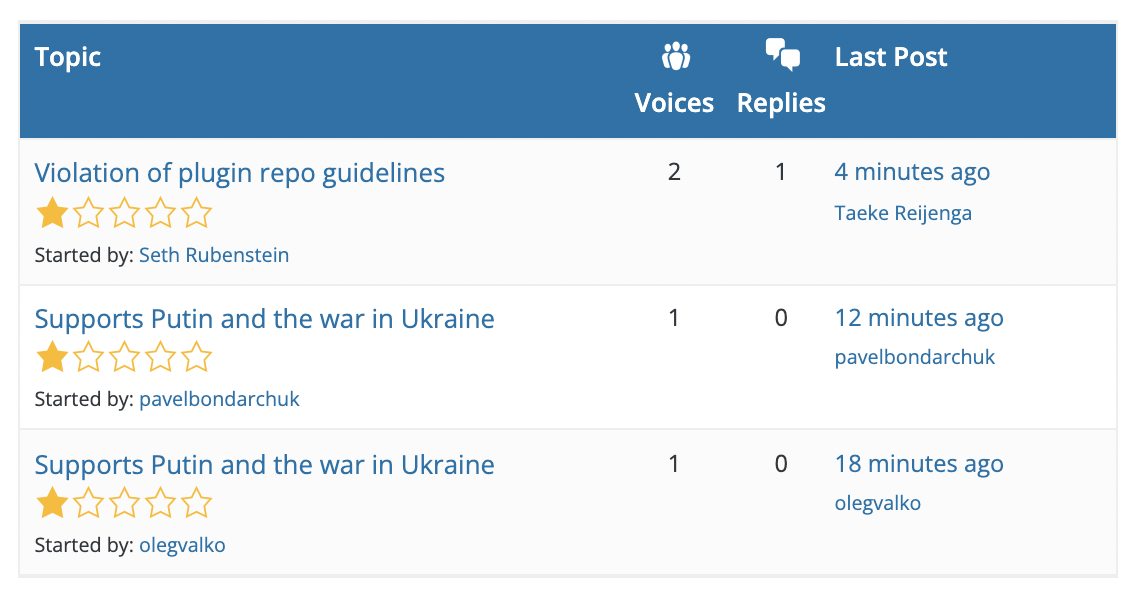 The “Z” symbol has been used by the Russian government as a pro-war symbol and a propaganda tool, and is frequently seen painted on the Russian tanks and military trucks that have invaded Ukraine. It is widely regarded as a symbol of war and violence. The Zamir plugin’s header image includes a black and orange ribbon, the Ribbon of St. George, which is also a symbol of the Russian military. The symbol was banned by Ukrainian lawmakers in 2017 as a symbol of “Russia’s war and occupation of Ukraine.”

A few participants in the discussion in the #pluginreview channel seemed blissfully unaware of the symbol and flippant in response to concerns, while others who have been more immediately impacted by Russia’s aggression tried to explain what it symbolizes.

“Here is some context about what this plugin is actually in support of, from a person sitting in a city bombed by cruise missiles,” Ukrainian WordPress contributor Andrey Savchenko said.

“To be crystal fucking clear, this is way ‘morally offensive’ and ‘abuse directed at any other member of WordPress community’ under item 9 of WordPress plugin guidelines.

“For anyone not closely familiar with the context – Z and V, that started as markings on Russian military vehicles invading Ukraine, were adopted by Russian state as symbols of gleeful support for the war, denying it is a war, denying they are killing civilians, and so on.”

Many are incredulous that the plugin was even approved in the first place.

“I’m completely appalled by having such a thing even being considered for inclusion,” Bas Schuiling said in the #pluginreview channel discussion. “I’m a refugee and fled Ukraine, and this exact symbol is being used to applaud and cheer the murder on my country, friends, and family.”

“We’re watching the birth of a hate symbol in real time,” Hancock contended.  “You’d have to be living under a rock to not see that.”

After a lengthy discussion, WordPress Executive Director Josepha Haden Chomphosy decided made the call to have the plugin permanently removed from the directory, overruling the plugin team’s decision. She followed up later with a published statement, clarifying why it was removed:

The plugin’s description, “Shows the Z symbol to support Russia,” eluded initial plugin checks. While it is true that there is no current plugin guideline barring plugins that “support” political leanings, this icon symbolizes something more complicated than that. Contributors were right to report this and, with their help and the help of WordPress community members, the plugin has been removed from the directory.

In a separate post on the Make WordPress Plugins blog, Haden Chomphosy said that since Z is an emerging symbol of hate, “it was considered a grey area in initial checks and on further review was removed.”

“As a reminder, WordPress guidelines call upon all community members–including extenders like plugin authors– to ‘be kind, helpful, and respectful,’ she said. “A symbol that is connected to an ongoing war and humanitarian crisis is none of those things.”

Many of those initially outraged about WordPress.org hosting this plugin are satisfied with the outcome, but it highlighted a disconnect between WordPress’ values and the current processes in place for addressing symbols of hate in extensions.

“I would hope that the WordPress Plugin Repository is not a place for plugins used to facilitate the spreading of propaganda and hate symbols that support war crimes and genocide in Ukraine. And that is exactly what the Z symbol has become.”

Haden Chomphosy’s statement indicated that the project may be reexamining its plugin review policies in the future.

“I am aware that this issue leads to natural questions about clarifying our plugin policies moving forward,” she said. “I’ll work with the community to explore our guidelines and create a clearer framework for how plugins can be evaluated in the context of current events.”
Category: News, Plugins