This article was originally published on this site
Block themes are trickling into the official WordPress Themes Directory at a slow rate ahead of full-site editing’s debut in WordPress 5.9. There are now 39 themes that support site editing features, up from 28 in December 2021, when Matt Mullenweg commented on it during the State of the Word address. “That needs to be 5,000,” Mullenweg said. Later during the presentation he said he hopes that WordPress will “have 300 or ideally 3,000 of these block themes” before entering the Collaboration phase of the Gutenberg project. 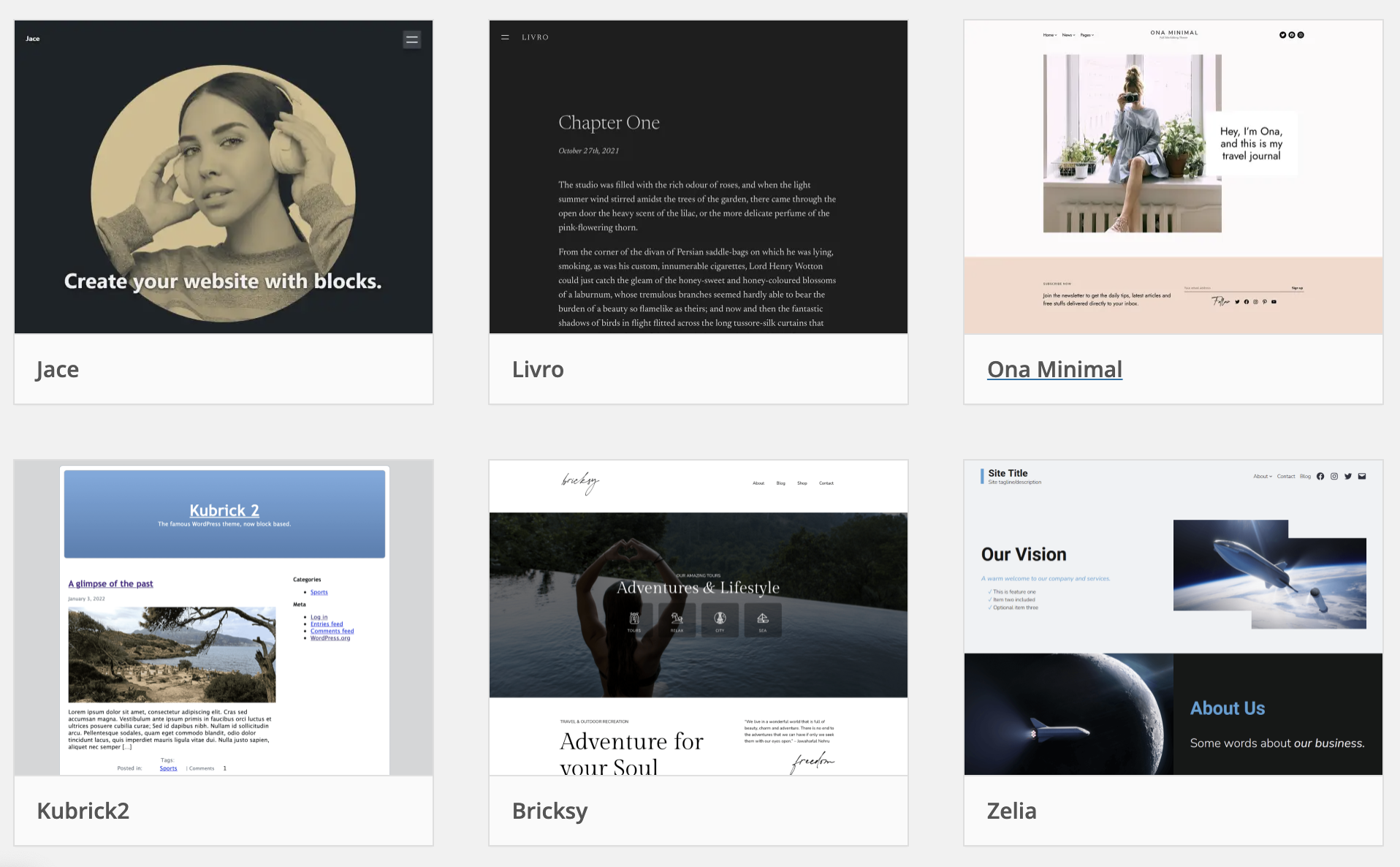 Why the strong push towards kickstarting the block theme market? The upcoming 5.9 release is set to deliver a solid set of groundbreaking design tools in core that will change WordPress website building in a major way. These include editing page layouts with a drag-and-drop interface and a new Global Styles interface for changing typography, colors, sizes, layouts, padding, and other aspects of design. Users cannot take advantage of all these new features without a block theme. That’s why WordPress 5.9 is introducing a new default theme, Twenty Twenty-Two, that will make it easy for anyone to get started using a block theme. But with just 39 block themes available right now, early adopters haven’t found a lot of variety. For whatever reason, more than 5 million WordPress users have still not transitioned to the block editor and are using the Classic Editor plugin. This experience is a shadow of what WordPress has become since the block editor made its debut in 5.0 more than three years ago. Even among users who have embraced the block editor, FSE early adopters are few and far between. Why aren’t theme authors creating block themes to have their products become some of the first on the market? WordPress Themes Team Representative Ganga Kafle jumped into this topic yesterday, asking why theme authors continue to make classic themes instead of getting on the block theme train.

Dear theme authors,Why you are not submitting block themes in WordPress as you submit classic themes on a regular basis? What are the reasons behind it? Please comment below. #WordPress #block #themes— KafleG (@sandilyakafle) January 18, 2022

Responses showed that theme developers have a variety of different motivations for holding out on building block themes. “I asked some local agencies here in Cape Town, and some of them indicated workflow – in that they were extremely efficient at creating sites with ‘their’ theme, and making a new block theme would eat into profits,” Automattic Theme Development Team Lead Jeffrey Pearce said. “They are waiting to see block themes ‘mature.’” Once 5.9 is released and FSE themes are officially supported, agencies will likely become more motivated to update their workflows to develop block themes more efficiently. During this in-between time, it’s easier to maintain the status quo, but now is the time to get prepared to hit the ground running. Once users know there is more to WordPress, they won’t want to be limited by a classic theme. For some theme developers, it’s a matter of not having the skills yet. “There is a learning curve but I expect more and more people will start building and submitting block themes,” WordPress consultant Krasen Slavov said. “I am personally eager to experiment and learn, but since it is a totally new way of building themes and we all need first to pay the bills, this should be in my spare time.” WordPress developer Sallie Goetsch, who said she builds themes for clients and not for the WordPress directory, is also eager to make the jump into FSE but has the same learning needs. “While I definitely plan to switch to FSE, there’s a lot for me to learn and experiment with before I’m confident enough to use it in production,” Goetsch said. Other theme developers cited difficulties keeping up with the ever-changing landscape of FSE theme development. “We can’t keep up with the changes,” CSS Igniter co-founder Gerasimos Tsiamalos said. “It’s miles away from offering something other than dead simple themes. [There are] too many inconsistencies to streamline.” Due to the nature of their day-to-day work load, some theme developers do not perceive early adoption of FSE themes as a practical move at this time. “We’re very happy using blocks for posts, but block enabled themes don’t give us the flexibility we need to build pages at the speed required,” Designs43 agency responded. “And there are too many changes to keep up with also. We tend to use a fairly basic theme and put customizations into the child.” “I guess the missing flexibility is a killer feature for theme authors,” WordPress theme developer Jessica Lyschik said. “It‘s very easy to bump into things that just don‘t work at all or yet.” The demand for block themes is not easy to measure. A conservative estimate of active installs of FSE themes hosted on WordPress.org is ~3,000 sites, based on the stats for the small number available. Once the world is introduced to WordPress 5.9 next week, that number is likely to shoot up overnight. “We have a few free FSE themes and working on a premium one,” WordPress Theme shop owner Ana Segota said. “I love themes are more design now and they are easier to use but it’s still a long way. We need to find a way to educate users about the new way of building websites and also it’s hard to follow all the changes.” Although block theme development is still in its infancy, there are a few educational resources for authors who are ready to take the plunge. Marcus Kazmierczak published a brief introduction to building block themes, which links to helpful resources from the Block Editor Handbook. Most notably, these include an overview of block themes, how to create a block theme, and a guide to Global Settings and Styles (theme.json). Carolina Nymark has also published a quick guide to creating block themes on fullsiteediting.com. If you’re looking for a starter for building block themes, Justin Tadlock has a few recommendations in one of his recent Ask The Bartender posts. Category: News, Themes