Yesterday, the WordPress pattern directory went live to the world as the development team behind it put the finishing touches on the project. It will work similarly to the theme and plugin directories in time. Along with WordPress 5.8, users can browse and use block patterns directly from the post editor.

Officially, the pattern directory shipped as part of the WordPress 5.8 release. The Tavern did not include this in its coverage yesterday because it was still listed as an “in-progress” project until several hours later. The team was still wrapping up several issues yesterday for the initial launch. 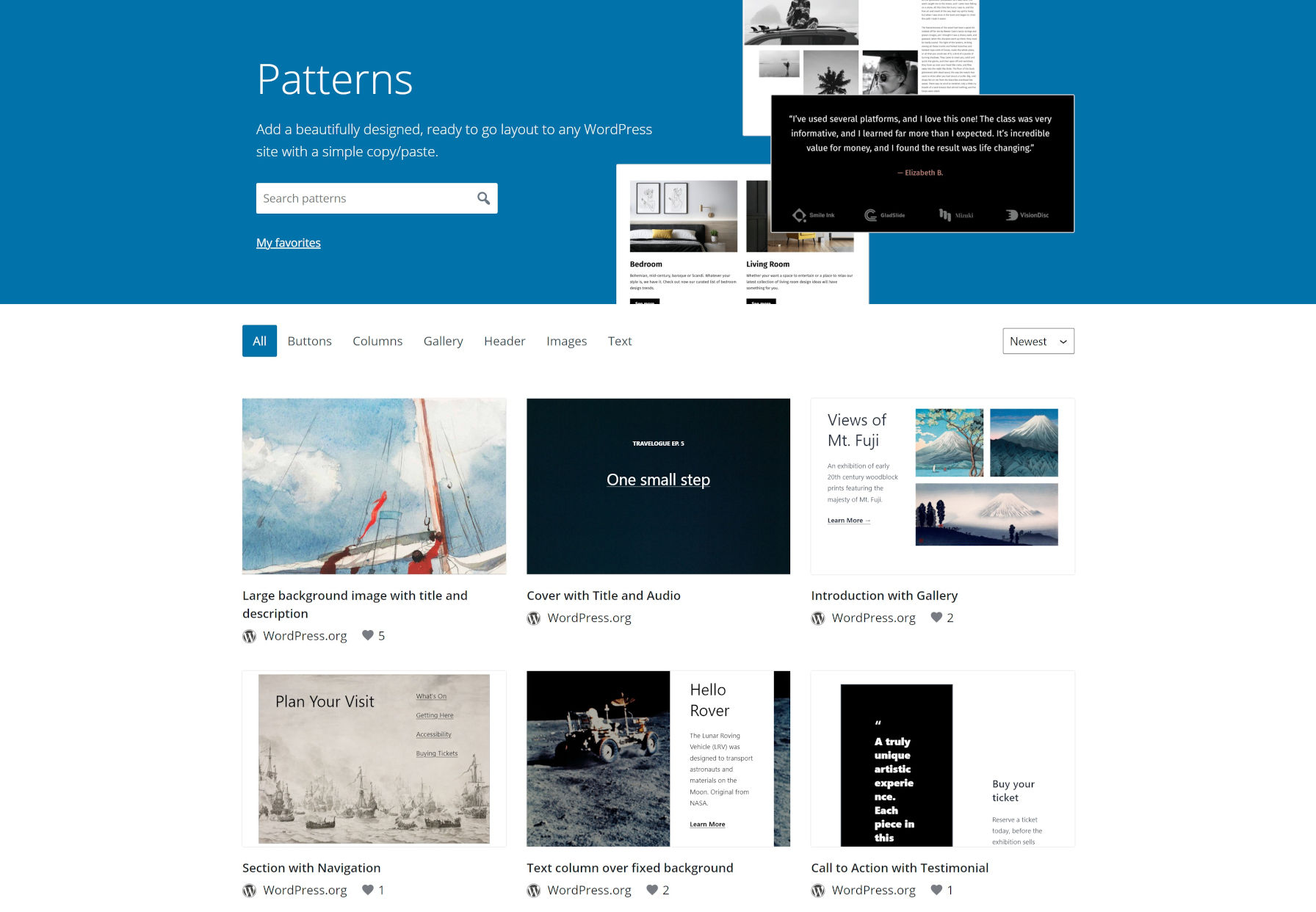 The current patterns in the directory are a curated list of designs from over 20 volunteers. The team called upon the community in early June, and it answered. To date, there are over 70 patterns across six categories to choose from:

Thus far, translations are complete for 12 languages. Others are at varying completion percentages, but there are dozens more that are incomplete. This would be an easy entry point for anyone who wants to give something back to the WordPress project.

I had a hand in building the About Me Cards and Team Social Cards patterns, but I cannot take all the credit. Kjell Reigstad and Mel Choyce-Dwan took my initial ideas and ran with them. It was a rewarding experience just peaking a bit into how other designers work. I only wish I could have put in more time during the initial submission window.

About Me Columns (left) and Team Social Cards (right) patterns

I look forward to submitting more patterns when submissions are open to everyone, the project’s next phase.

“Work is now beginning on the next milestone, which will enable patterns to be submitted by anyone, similar to the Theme and Plugin Directories,” wrote Kelly Choyce-Dwan in the announcement.

I am excited to see where the overall community can take the directory. Submissions have been limited and held to a specific aesthetic that will not be universally appealing. It may be hard for some users to look beyond centuries-old artwork, flowers, and the current fling with offset columns to see how a specific layout would work for their site. For others, it is perfect.

Even I struggle with this. I can see the structure beneath the default images and text, but I am not inspired to use most of the patterns because they simply do not fit my personal style. When selecting one, I want to feel like the designer was building something just for me. I suspect that will play a part in winning over more users and bringing some holdouts over to the block system. 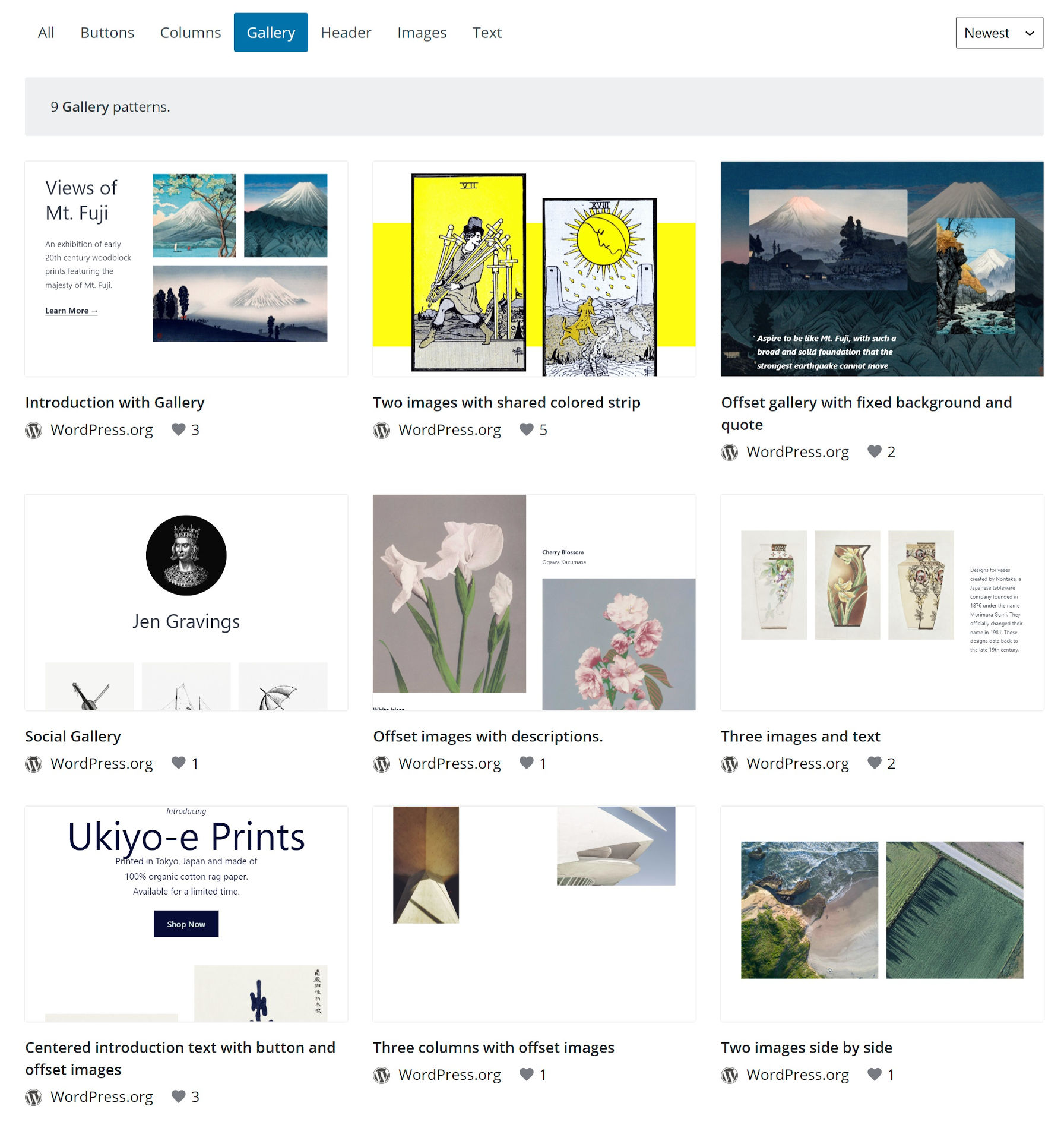 One limitation of the pattern directory is the imagery. Now that services like Unsplash, Pexels, and Pixabay have put limitations on their licensing, it can be tough to find photos and artwork that meet the guidelines for submissions to WordPress.org. However, that could open up a bit with the potential integration of Openverse, formerly the Creative Commons search engine. Making it easier for pattern designers to find the perfect images to build out their visions would improve the overall quality.

What will eventually make the pattern directory a worthwhile venture is when the best designers from the WordPress ecosystem step up and begin competing. I eagerly await a breadth of authors putting their own stylistic spin on submissions.