As a teen, I would visit my Uncle David’s house every other week or so. He was the only family member with a computer. It was an old, bulky monstrosity that ran whatever the latest version of Windows that existed at the time. It was one of my first introductions to dial-up, but my primary interest was not the internet. It was newsletters and home-printed magazines.

Like all members of my family, we are artists in one way or another. What little extra money many have is spent on creative pursuits. Uncle David’s latest passions at the time were in designing T-shirt logos and printing a family newsletter. Does anyone remember when those were still a thing? I was a kid in a whole new world. Of course, I followed suit and issued a few pamphlets covering the latest goings-on with my family to a circulation of maybe a dozen people.

This kick-started my foray into journalism and design during my adolescence. A family newsletter sounds far more interesting to me now, as an adult, than it did in those days. Somehow, I know I have reached the point where I can officially call myself old by saying that. But, I was coming of age at the turn of the millennium. My interests mostly revolved around video games. I wanted to create something that rivaled Nintendo Power from the comfort of my own home. I had access to a computer and printer; the dream was mine for the taking.

Unfortunately, I could not find any of my printed family newsletters to share. My gaming mag was a short-lived, two-issue venture. I am sure the staff, consisting of my younger sister and best friend, unionized and staged a revolt.

Throughout my life, I have always had it in the back of my mind that I would attempt another periodical at some point, but I have never gotten around to it. However, when Newsletter Glue co-founder Lesley Sim asked me to look at the pro version of her team’s plugin, all those old ideas started swirling around in my head again.

After spending the last few days tinkering with Newsletter Glue Pro, I kind of want to restart the family newsletter again. Maybe digital is the way to go. Perhaps I can even get my uncle to join me.

Admittedly, I have had a lot more fun with this plugin than with others recently. It is the sort of extension that can take a potential newsletter from idea to execution.

All you need is to be familiar with the WordPress editor to kick-start a new project. The plugin has a few settings you might want to tinker with, but the onboarding process walks you through the steps of getting everything off the ground and connecting to your preferred email software. I was worried that there would be a massive learning curve, but I was in the editor in short order.

Writing a newsletter from the WordPress editor.

What I enjoyed the most about Newsletter Glue was its integration with the block patterns API. The plugin bundles several header and footer patterns, but end-users can build and store their own for reuse.

Duplicating and customizing a footer pattern.

The plugin did have its share of issues. The most prominent was its automatic switching to the fullscreen editor, which is a feature that I turn off on every WordPress site I use. For some reason, this either did not save or was being overwritten each time I loaded the page.

I am also not a fan of the meta box at the bottom of the screen. It is giving me flashbacks of the pre-5.0 WordPress editor that I would like to forget. The team should create a dedicated sidebar panel for the newsletter screen. 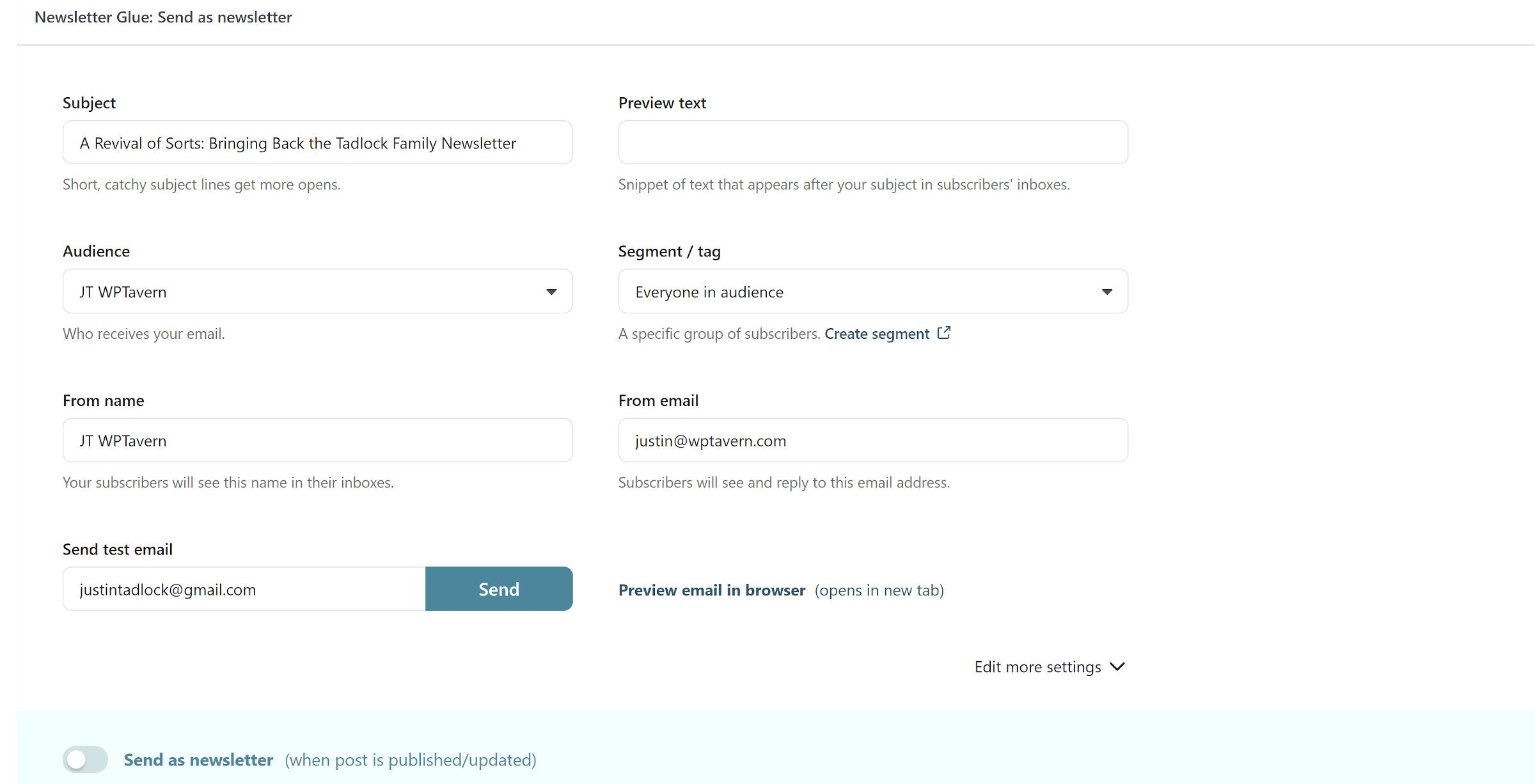 With its reliance on the modern editor, this holdover from an older time just feels out of place. Plus, from a UI perspective, there seems to be nothing requiring the old meta box system.

I would also like to see the built-in Newsletter theme designer integrate with the active theme’s JSON presets. This is a relatively new WordPress feature, so maybe it will land on the features list.

Because this is a standardized format, there is no reason that plugins should not start pulling data from it. As a user, I should at least be able to pick and choose text, background, and link colors from those made available through the theme instead of hunting down hex codes or eyeballing it from a color picker.