Is There a Future for Small WordPress Businesses?

Is There a Future for Small WordPress Businesses? 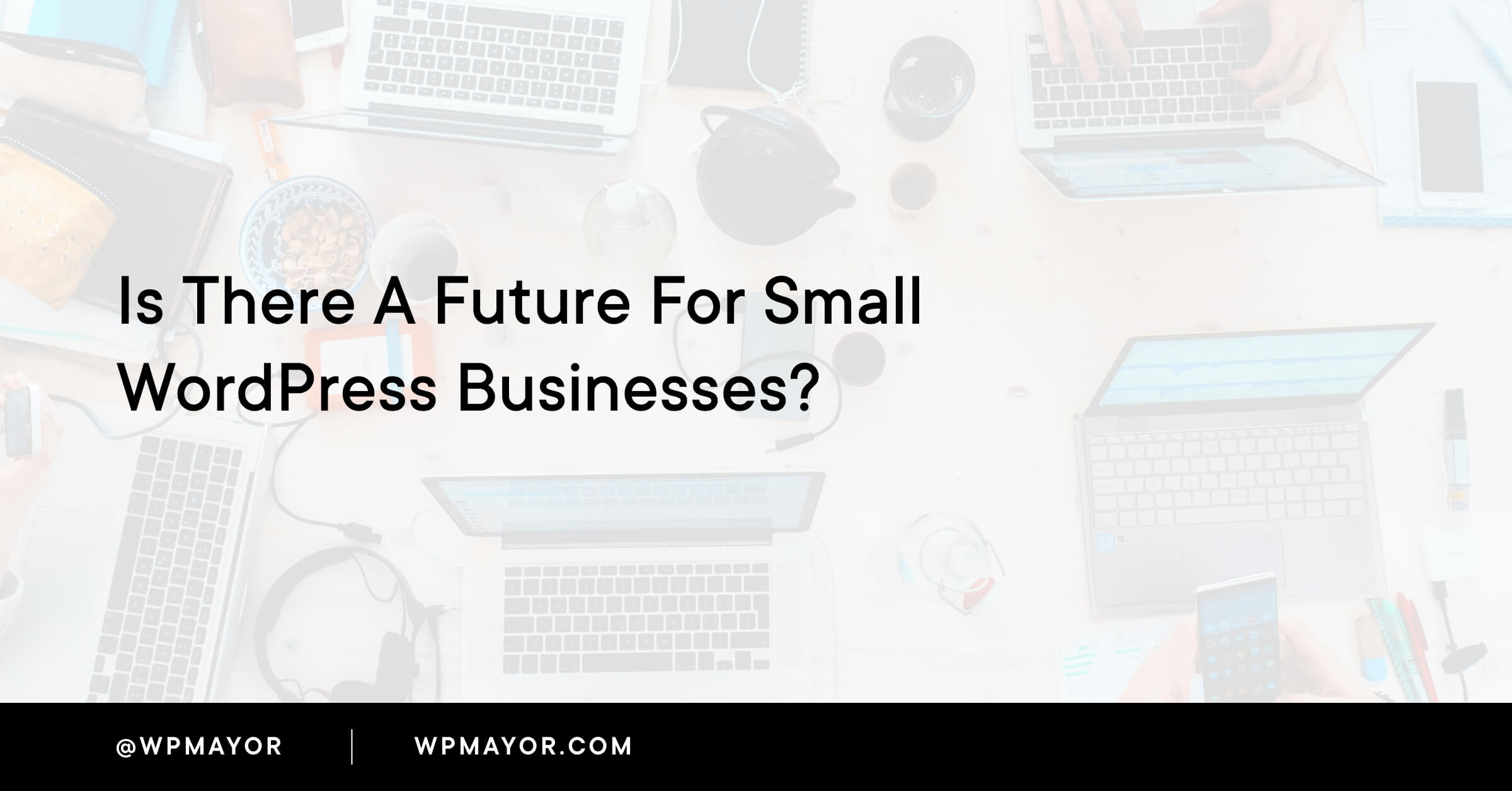 The past few months have been riddled with acquisitions in the WordPress space. This past week we saw two huge ones with LearnDash becoming part of StellarWP (Liquid Web) and Sandhills Development selling all its plugins to Awesome Motive.
Both of these are huge acquisitions with the latter causing more concern than the rest. More on that later.
Right now, my question is this… Is there a future for smaller WordPress businesses?
The Fragmented WordPress
WordPress as a platform has always been fragmented.
As a new user, you need to find a hosting provider, pick a domain name, buy both of those, then figure out what this thing called WordPress is and how it works. Once you’ve done that, you need to search for and buy a theme, but that doesn’t do everything you need, so then you need to search for and buy plugins.
But what if they don’t all work together?
How do I know who’s a trustworthy developer/seller that I should buy from?
How has a “simple website” turned into days and weeks of research before I even get anything up?
That’s pretty much been the real-world situation for new users who aren’t developers. For developers, on the other hand, it’s been a constant battle to find the best plugins that are in it for the long run, extensible, and so on.
They would build a site for a client and then a plugin update takes it down. Now they have to reach out to a plugin developer to find out it’s likely a conflict, so they have to contact yet another developer.
It might work right now, but it’s fragmented, to say the least.
The Structured WordPress
This is what hosting companies (GoDaddy, Liquid Web, Automattic through WordPress.com) and the likes of Elementor Cloud seem to be after. An end-to-end hosted solution that doesn’t necessarily rely on “WordPress” in terms of marketing but uses it under the hood to power their custom all-in-one solution.
It makes sense for the user – they just need to pick a solution and the experience of building their website becomes a smooth, singular process with minimal interference from anywhere else. Each solution will offer the extensibility of WordPress and all the benefits that come with that but solve the problem of needing all the constituent parts.
It sounds utopian, but it’s already in existence in different forms. The solutions I mentioned earlier are a work in progress that look like they could become incredibly powerful and successful in the coming years.
The Future of WordPress
As a Platform
Currently, there seem to be two paths that new users could choose from in the future. The Do-It-Yourself method which we’ve seen for the past few years and the hosted version which you’d get when choosing to work with a hosting provider or builder.
Whether one will win out over the other and whether the two can co-exist at the scale they’re at today is yet to be seen.
As an Industry
This is where my personal concerns lie and I don’t have an answer yet (and neither does anyone else, in truth).
Over the past couple of days, I’ve had many questions of my own pop into my head apart from the ones I’ve seen on Twitter, Post Status Slack channels, and so on…

An Unfair Advantage?
Going back to what I said in the introduction, Carl Hancock’s tweet sums up my concerns:

Imagine using an e-commerce system that provides all of your sales data to your competition/potential competition on a silver platter. Competitive analysis made easy. I hope WordPress plugin and theme developers are paying attention. 👀 pic.twitter.com/uz3EwbbolX— Carl Hancock 🚀🇨🇷 (@carlhancock) September 23, 2021

I’ve read about Pippin’s reasons for selling and even personally congratulated him on his decision. He made the right choice for himself and I completely understand the reasoning. On its part, Awesome Motive has made a huge move that made a lot of sense for the future growth of their company.
This change in ownership could lead to a lot of improvements being made to Easy Digital Downloads, AffiliateWP, and so on. After all, with alternatives like Freemius out there that have high fees and some limitations in running affiliate programs, handling automated email reminders, and so on, this could be a net positive for the industry standard of software used to sell and market WordPress products. Everyone needs to step up their game.
However, Carl’s tweet is exactly what I thought the moment I read the news. Here’s why it’s concerning…

Elaborating on that last point, if you’re using AffiliateWP’s payouts service, I believe some of that data may be visible to the product owner. As for EDD, if you’ve opted into usage tracking, there are a few things that are tracked that can be used in market research. Getting to sales data, EDD doesn’t track that directly in any way. If you use the Stripe Connect integration though, I believe that might then share certain sales data only on orders that are processed through that gateway.
(If any of the above is inaccurate, let me know in the comments below and I’ll update it accordingly.)
This potentially gives one company access to information about the WordPress market as a whole that no one else has and, in my opinion, no one person/company should have. It’s like Freemius using their data to go and build products that will compete with whatever sells the best on their platform. Perhaps it’s less obvious since EDD and AffiliateWP aren’t full-on SaaS solutions like Freemius is, but just having the opportunity to access and use that data is a concern in itself.
This brings up even more questions…

Alternatives
It’s worth mentioning that there are alternatives to these solutions. As a point of reference, here are a few that I have personally used or researched.
SliceWP – an AffiliateWP alternative that is WordPress-based.
Impact or Shareasale – AffiliateWP alternatives that are not WordPress-based.
Freemius or WooCommerce – EDD alternatives that are also WordPress-based solutions.
Chargify or FastSpring – EDD alternatives that are not WordPress-based.
We personally use EDD, AffiliateWP and Freemius for our products.
Whether that will still be the case in a year or two is still to be decided.
Why Is This Happening?
Those selling plugin businesses right now are mostly WordPress OGs who have been around for a decade. Entrepreneurs like these need new challenges and they all reach a point where they don’t feel like they can contribute any further to a project’s growth.
Some lose their passion for the industry or for their product and decide that they need a new personal challenge. All of these are valid reasons to move on and acquisitions are probably the best solution to keep most of the team and their users happy (and employed) in the long run.
WordPress as a platform on its own is currently too fragmented to compete with solutions like Shopify and Squarespace. That’s why we’re seeing the introduction of Gutenberg, blocks, full-site editing, and so on. That shift appears to be a net positive for everyone.
Single companies will create their own platforms that users will easily familiarise themselves with, probably without any mention of WordPress. This will give them the freedom to create what they want, just the way they want it.
The likes of Automattic, Liquid Web, Elementor and so on will become the main choices for news users. It simplifies the onboarding and takes away the complexity that has caused WordPress to no longer always be the go-to solution for a quick site build.
Is There a Future for Small WordPress Businesses?
Once again, I have more questions than answers…
Can smaller companies survive for more than 2 to 3 years with the current way of doing things?
Can smaller businesses compete with large companies that have huge budgets and teams of experts?
Even if one can build a better product, do they have the marketing power to reach enough potential customers and make their investment profitable before it’s too late?
Is it time for smaller businesses to turn their focus towards growing their business with the sole aim of getting acquired in a year or two and “cashing in”?
Should small businesses be looking at becoming the go-to seller for a particular niche of products that these larger “one-stop-shops” won’t have the time or desire to work on?
Looking beyond standalone companies, what about the WordPress community as a whole? Will opinions and perspectives remain as diverse as they have been in the past or will these acquisitions create a few schools of thought that will become the most powerful voices, drowning out the rest?
Or… Should one be looking outside of WordPress altogether?
On a Positive Note
This could be a time to innovate and invest in the future of WordPress. It’s risky, perhaps more than ever, but it could be well worth your time (and money).
You could build something completely new or just take a new approach to an existing problem. Differentiating yourself from the existing, larger solutions out there will be key if you choose to do this, but again, it can pay off nicely.
There are big pros and cons to all of this. So many opinions, thoughts and options.
At the end of the day, following Brian Gardner’s advice may be the best way to take a step back, reflect on what’s going on, and figure things out for yourself…

About the Author: Mark Zahra