How PortraitFlip Converts Over 3% of Its Mobile Traffic into Leads

How PortraitFlip Converts Over 3% of Its Mobile Traffic into Leads

Wouldn’t it be great to go from nearly zero email subscribers to converting over 3% of your mobile visitors in just a few months? PortraitFlip used OptinMonster’s spin-to-win discount wheel, mobile exit-intent popups, and split-testing best practices to do just that. Let’s take a look at how PortraitFlip was able to drastically grow their email list to scale the business.
Meet PortraitFlip
PortraitFlip takes your standard photo and digitally turns it into a handmade painting. This allows their clients to create a unique, beautiful, and lifelong memory that’s a welcome addition to any home. 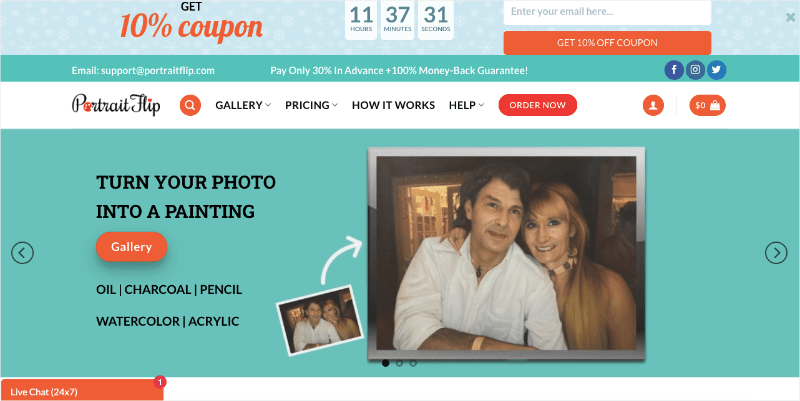 One of the things that make PortraitFlip stand out is their dedication to customer service. Each photo that’s transformed into a painting comes with a 100% customer satisfaction guarantee.
They also offer free worldwide shipping to empower more users to make a purchase. And if any changes or modifications need to be made to the final result, they’ll make unlimited revisions at no cost.
With all of these amazing offers in place, you would think collecting emails would be easy.
But, as you know, the world of eCommerce is far from easy–unless you’re working with the right tools, of course.
Because when PortraitFlip began using OptinMonster, they saw a BIG change.
At first, they were getting almost no email signups, conversions, or leads from their website. After installing a handful of campaigns, they started converting over 3% of their site’s mobile visitors.
Now, we want to show you exactly how they did!
How PortraitFlip Uses OptinMonster
PortraitFlip knows a thing or two about driving traffic to their website. They rely on organic traffic over paid advertising to bring lots of potential leads to their services.
But if those people leave the website without signing up, all that traffic might as well have never visited in the first place.
This is especially true considering 70% of customers who leave a website never come back.
With just a few campaigns, PortraitFlip was able to easily transform their traffic into qualified leads and drastically grow their email list.
How? They used 2 methods:

Let’s take a look at what these campaigns look like, starting with a floating bar.

For desktop users, PortraitFlip added a gamified fullscreen “spin-to-win” wheel to their site:

But they weren’t done just yet. They also added an exit-intent popup specifically for mobile devices. The popup is simple but incredibly powerful: 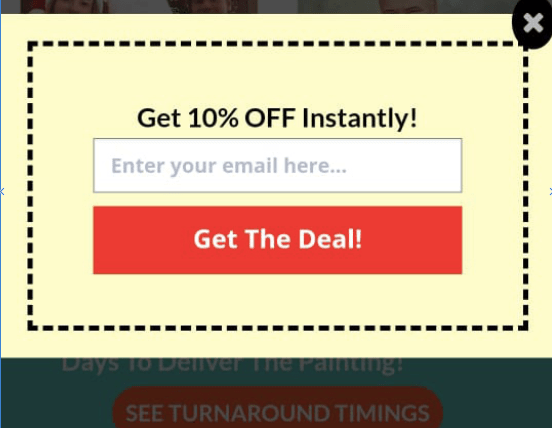 This campaign converts at 3.08% of mobile users who saw it.
A few factors played a role in PortraitFlip’s success, though.
First, they did some audience research by running split tests with OptinMonster. They created 4 nearly-identical campaigns and ran them simultaneously.
The only difference between the campaigns was the photos used. The goal was to understand which photos attracted the most email signups.
And since split testing in the OptinMonster dashboard is so simple, setting this up wasn’t difficult at all.
Sunny Kumar, PortraitFlip’s owner, had this to say:
“The best thing about OptinMonster, apart from the substantial rate of positive results, of course, is their user interface. It is immensely simple and very well integrated. It comes like breeze to a layman and brings about incredible outcomes.”
This is an important point to make because Sunny isn’t a professional marketer. He’s an eCommerce store owner who needed a tool that was:

OptinMonster gave him a lead generation tool that checked all those boxes.
The second thing that helped Sunny design the perfect campaigns for PortraitFlip was OptinMonster’s templates.
These allowed him to create optin campaigns for mobile and desktop in a matter of minutes with no coding skills required.
With over 50 premade templates, Sunny was able to select the one that most nearly matched his specific goals: growing an email list from both desktop and mobile devices.
Then with the drag and drop editor, he was able to make minor modifications to each campaign to target the messaging specifically to his audience.
This is important because, again, Sunny is an eCommerce store owner which means his time is literally money. He couldn’t waste hours of his time struggling through a campaign editor.
Instead, he loved OptinMonster because the campaigns were as simple to create as they were effective at getting new leads:
“OptinMonster is a perfect combination of a beautiful design and user-friendly configuration which undoubtedly brings great conversion rates. I personally feel that it has a very easy-to-understand interface which is elementary and painless.”
Now that we know how PortraitFlip uses OptinMonster, let’s look at the results they achieved.
Results
PortraitFlip relied mainly on the 3 campaigns mentioned above, and in just a few months, they converted over 3% of mobile visitors and added hundreds more with only 2 other campaigns.
This is a great start for an eCommerce site that was getting almost zero signups before using OptinMonster.
What did they love about working with us?

In the end, PortraitFlip went from getting no new leads to consistently attracting over 100 new signups every month.
Summary
PortraitFlip turned to OptinMonster because they were tired of seeing their site’s traffic go to waste. Again, the majority of users who leave a website never come back!
That’s why capturing these potential leads as they were actively leaving was such a big part of PortraitFlip’s success.
And while they’ve seen a direct increase in sales and reduction in their site’s overall bounce rates, the biggest benefit is put best by Sunny himself:

“The cherry on the top is the number of email signups and visitor conversion that has doubled up since inception and the sole credit goes to OptinMonster.”

About the Author: Nathan Thompson